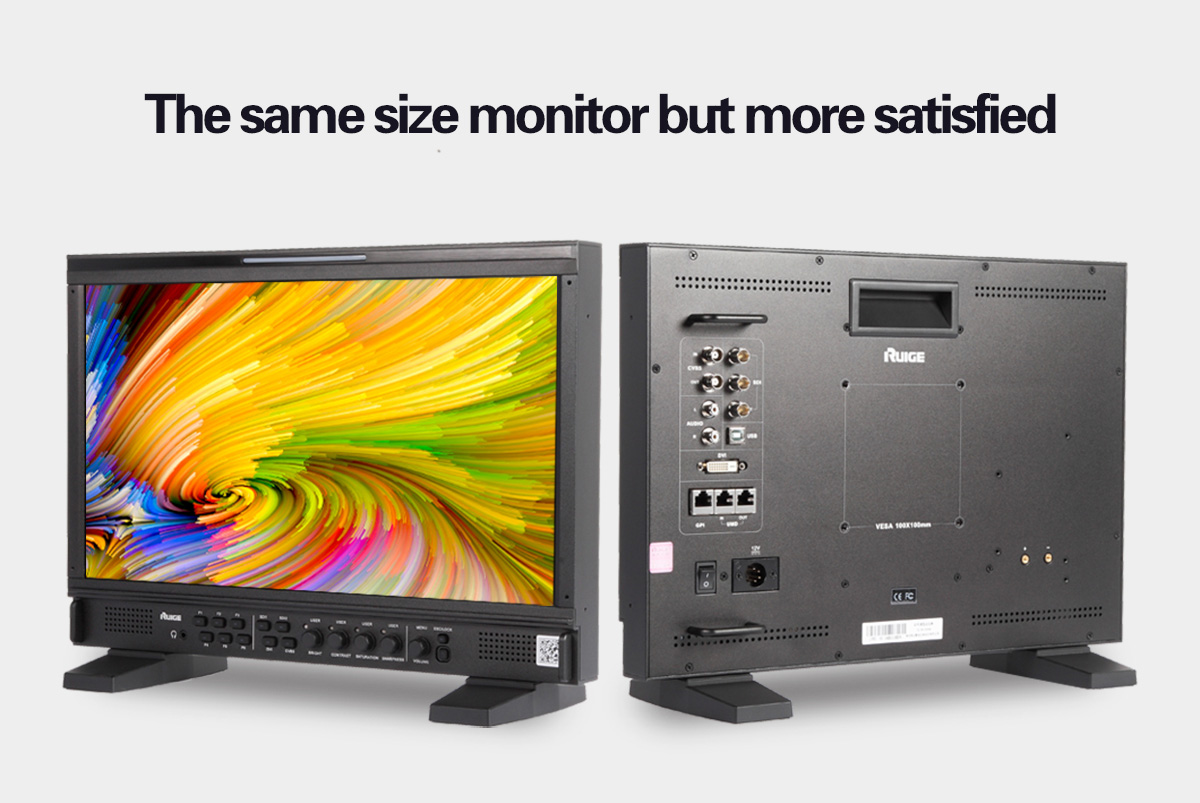 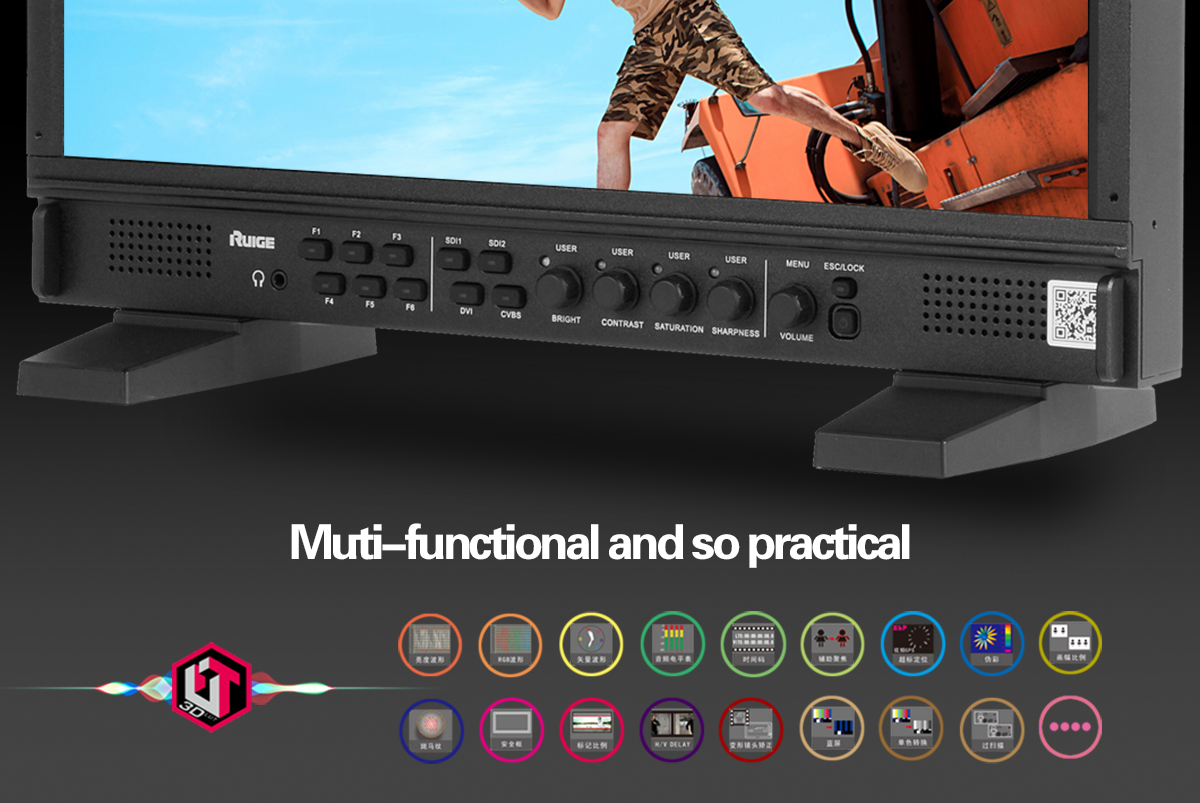 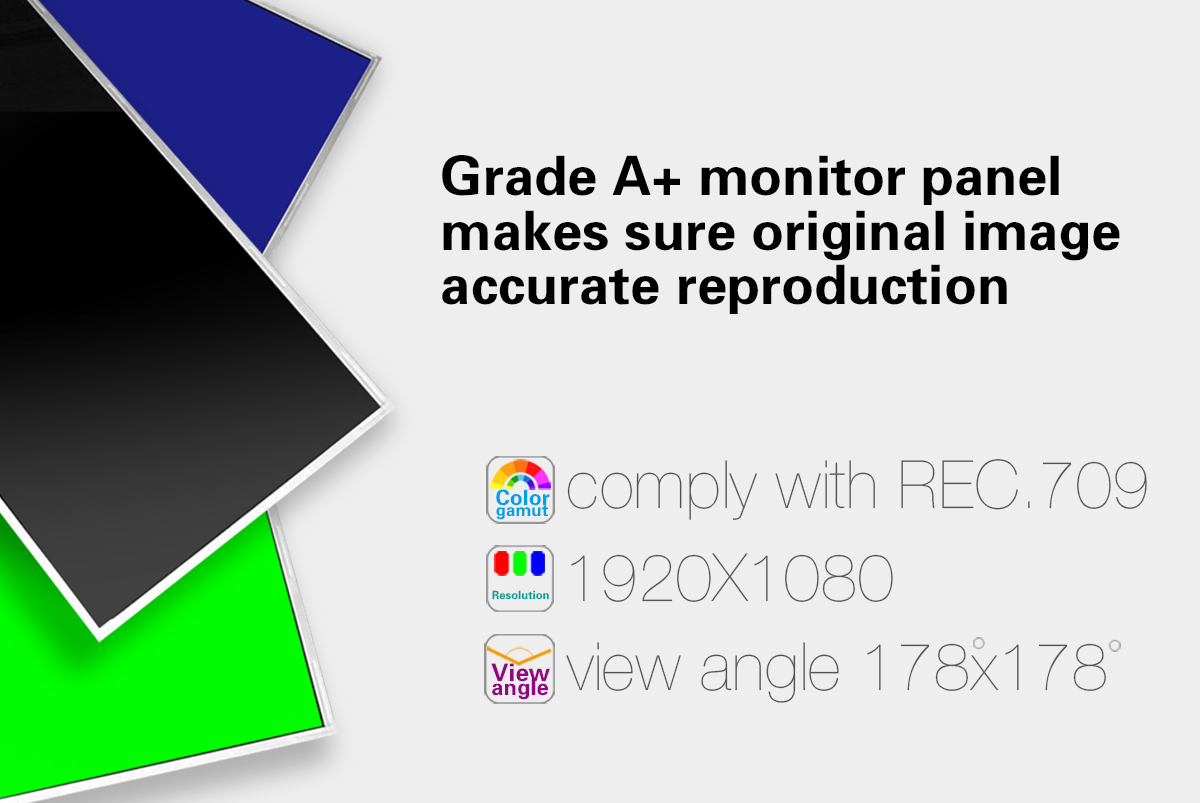 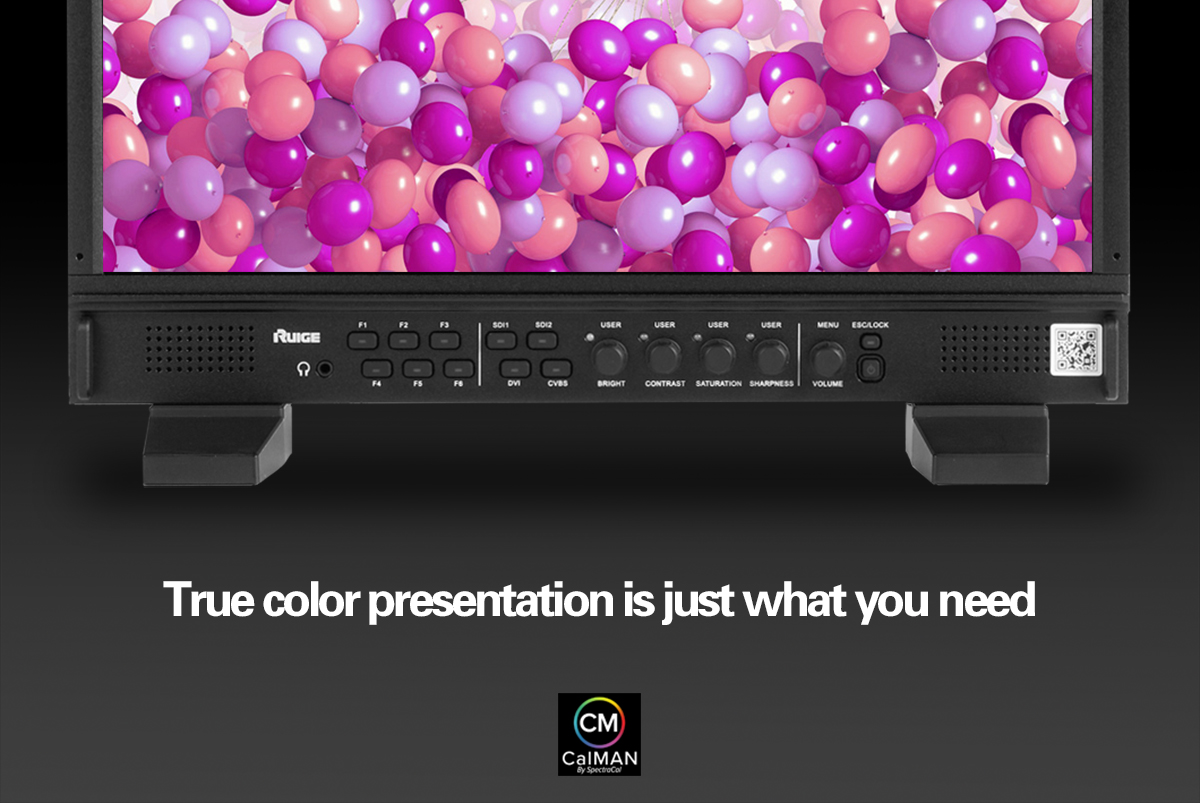 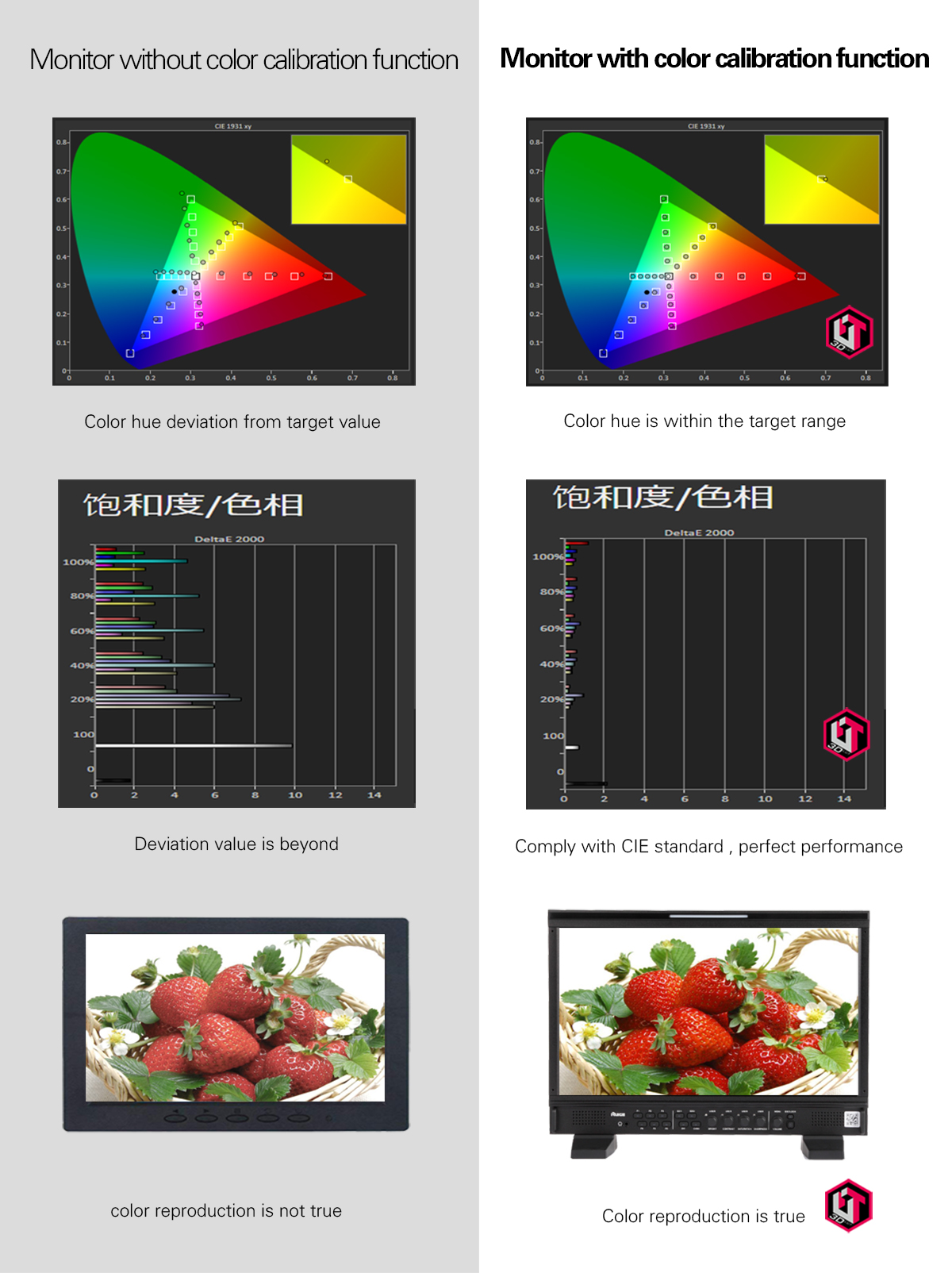 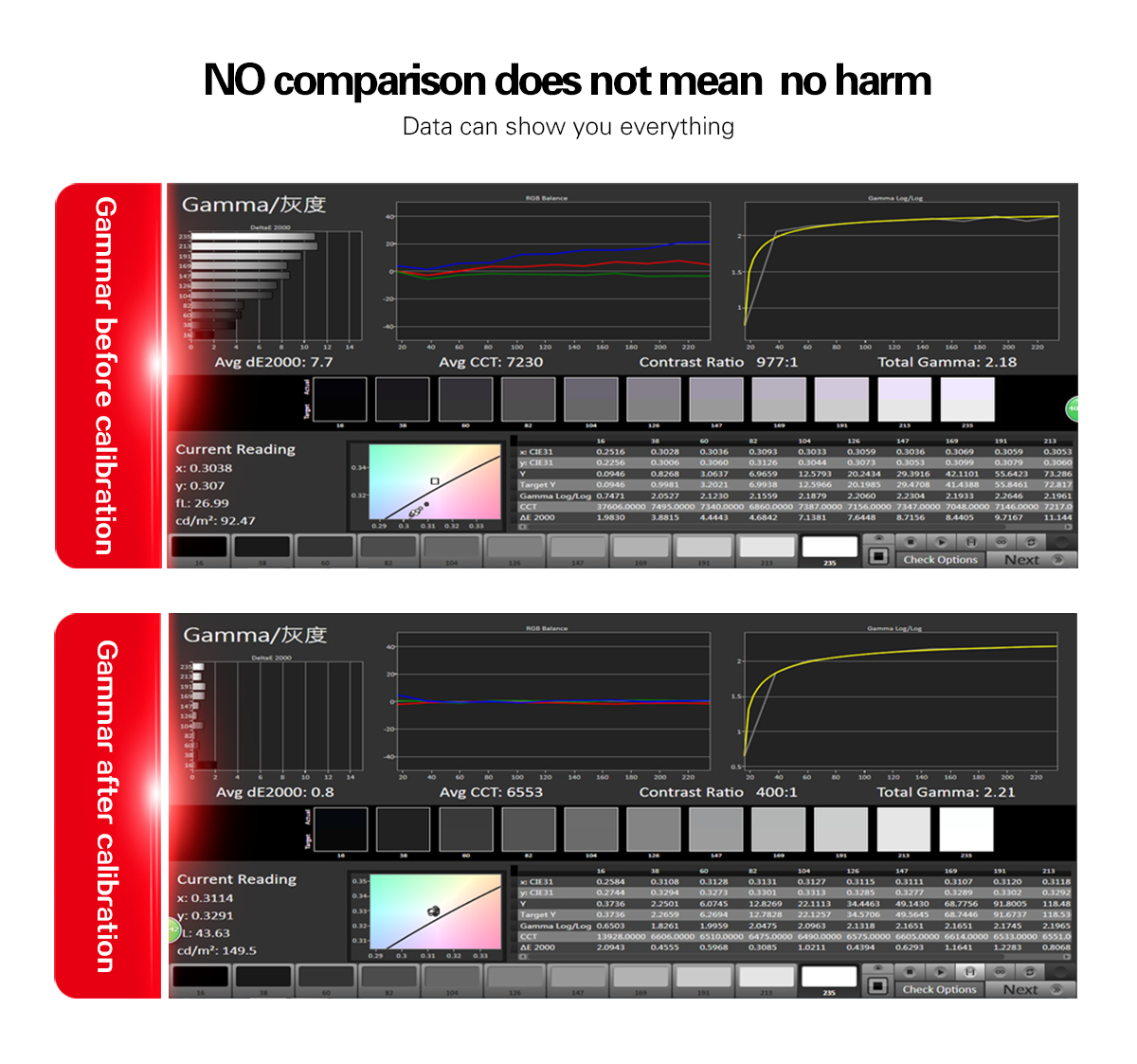 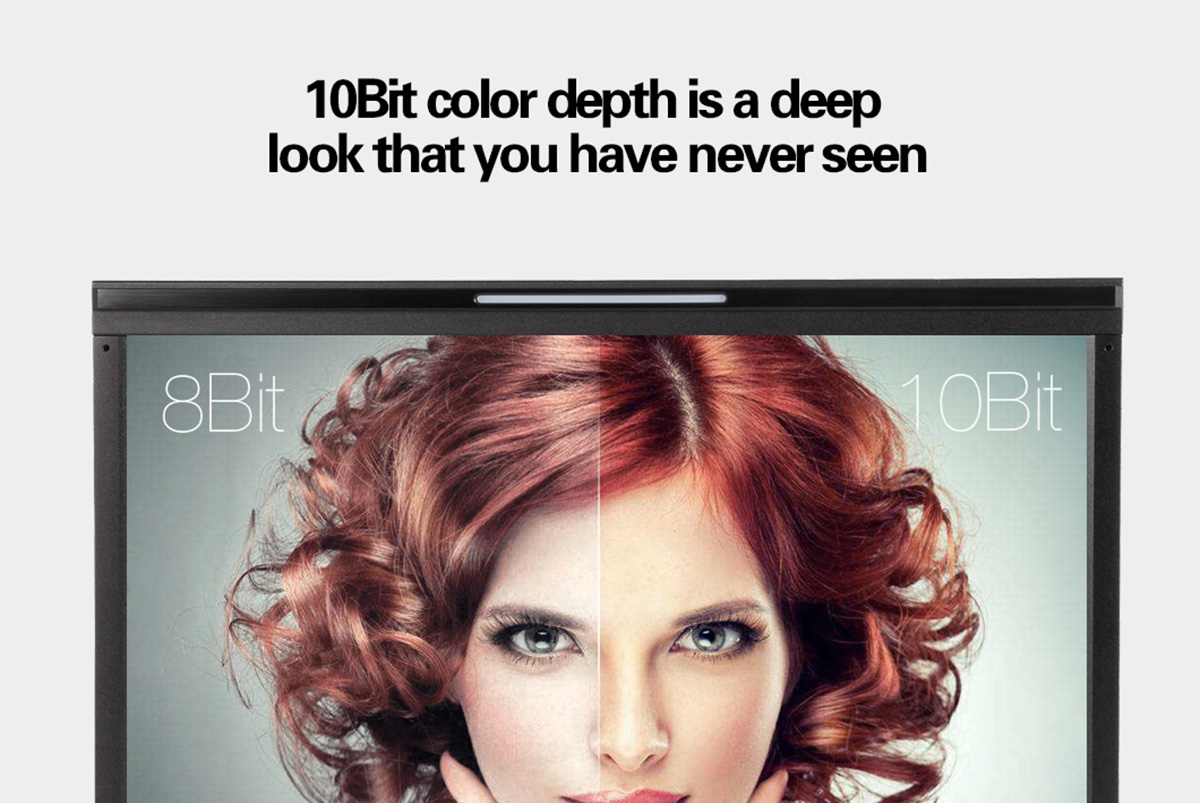 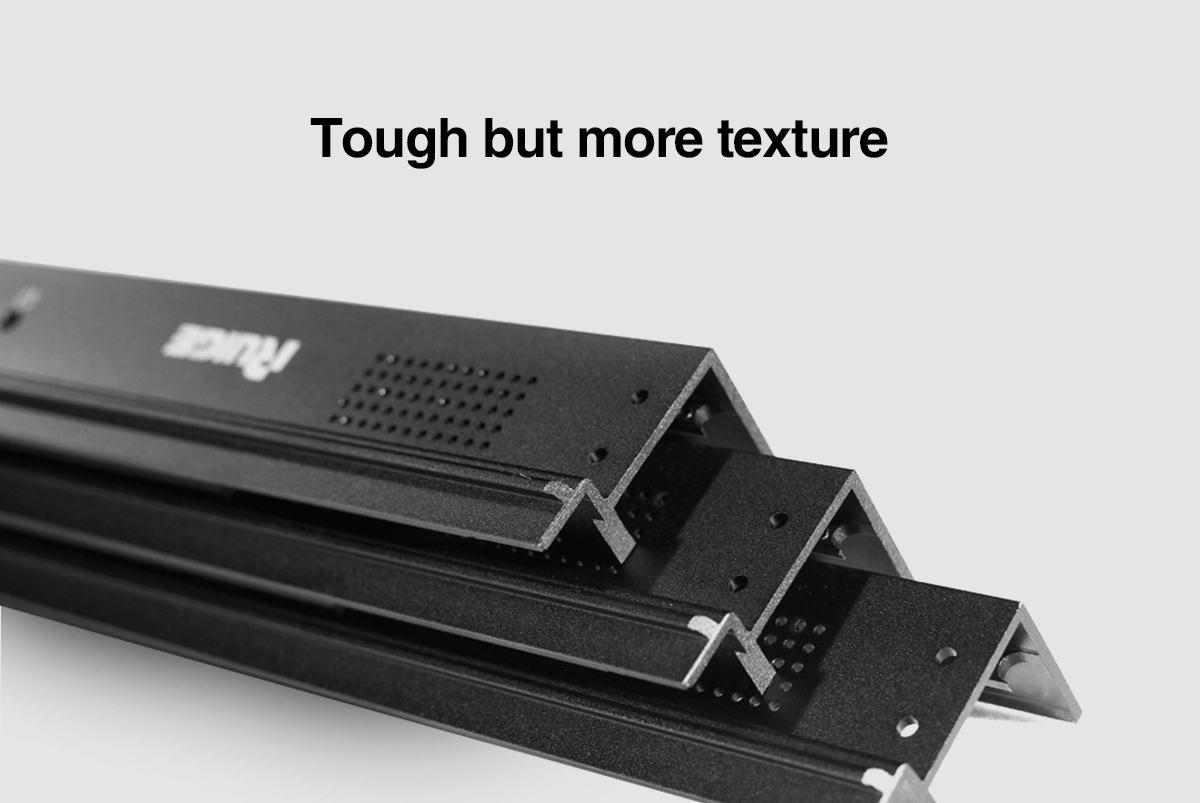 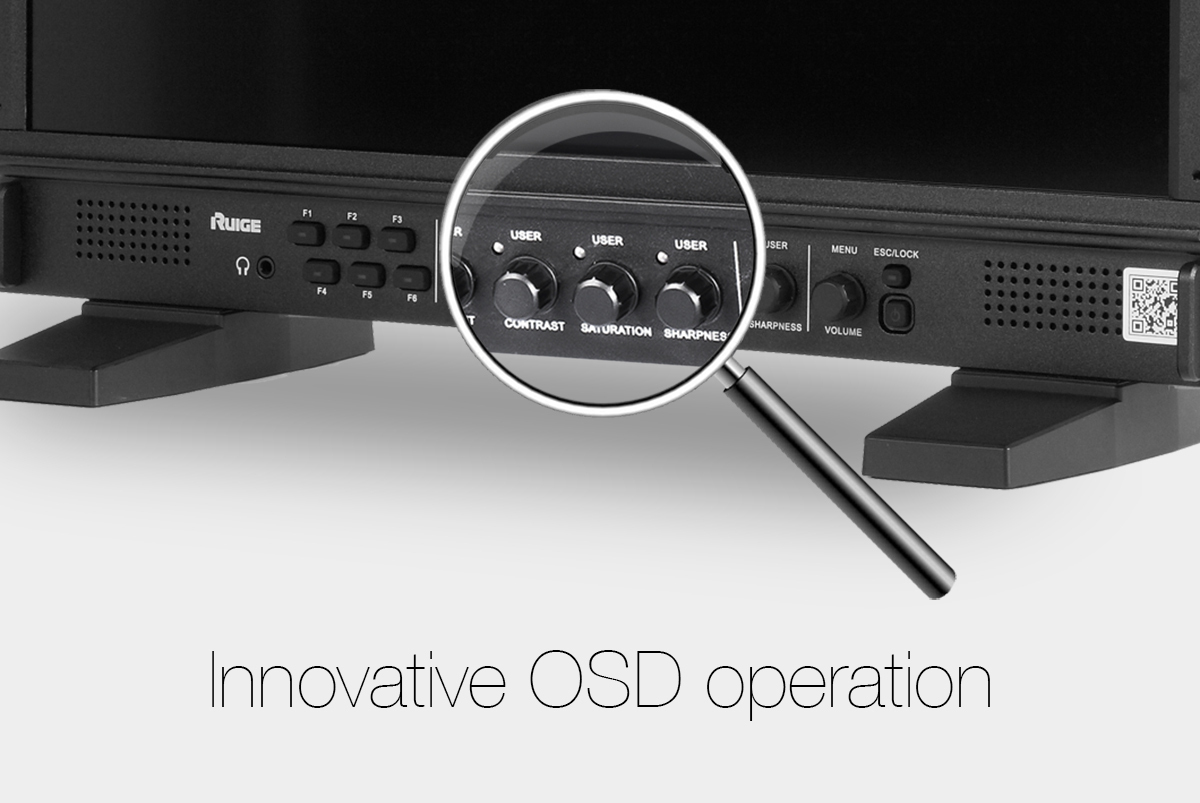 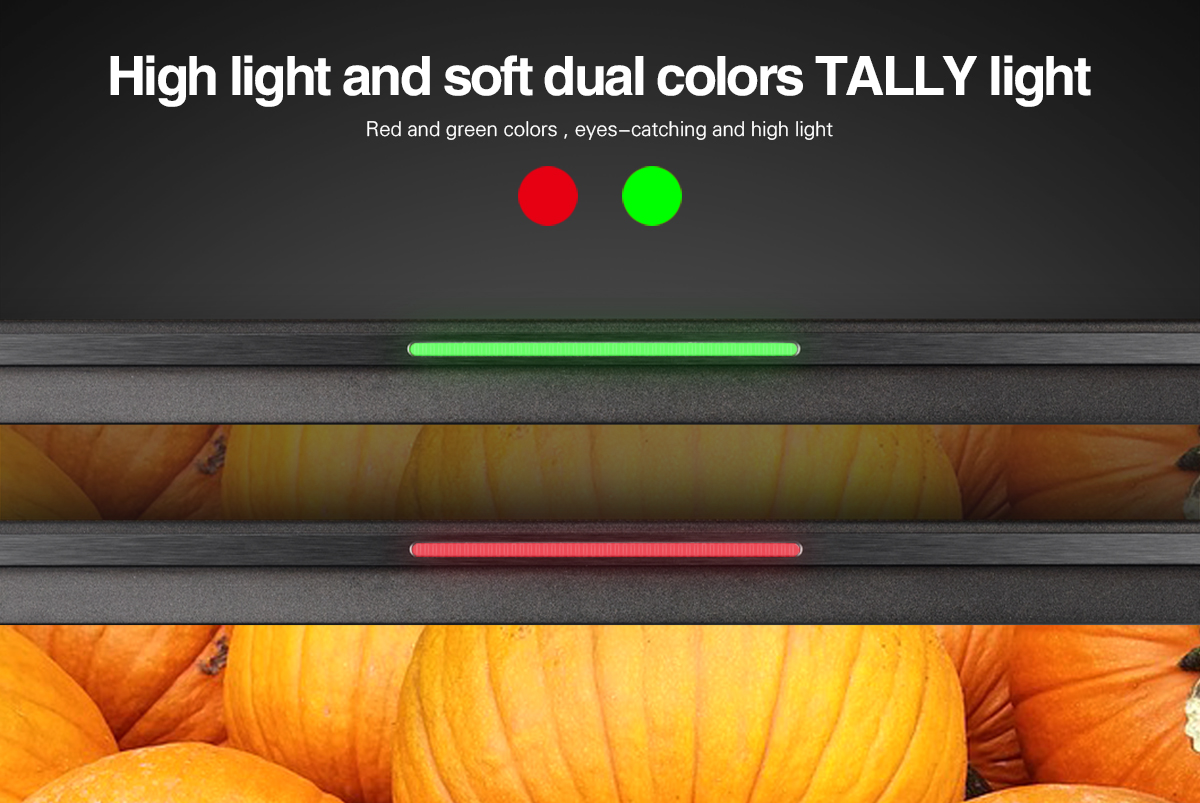 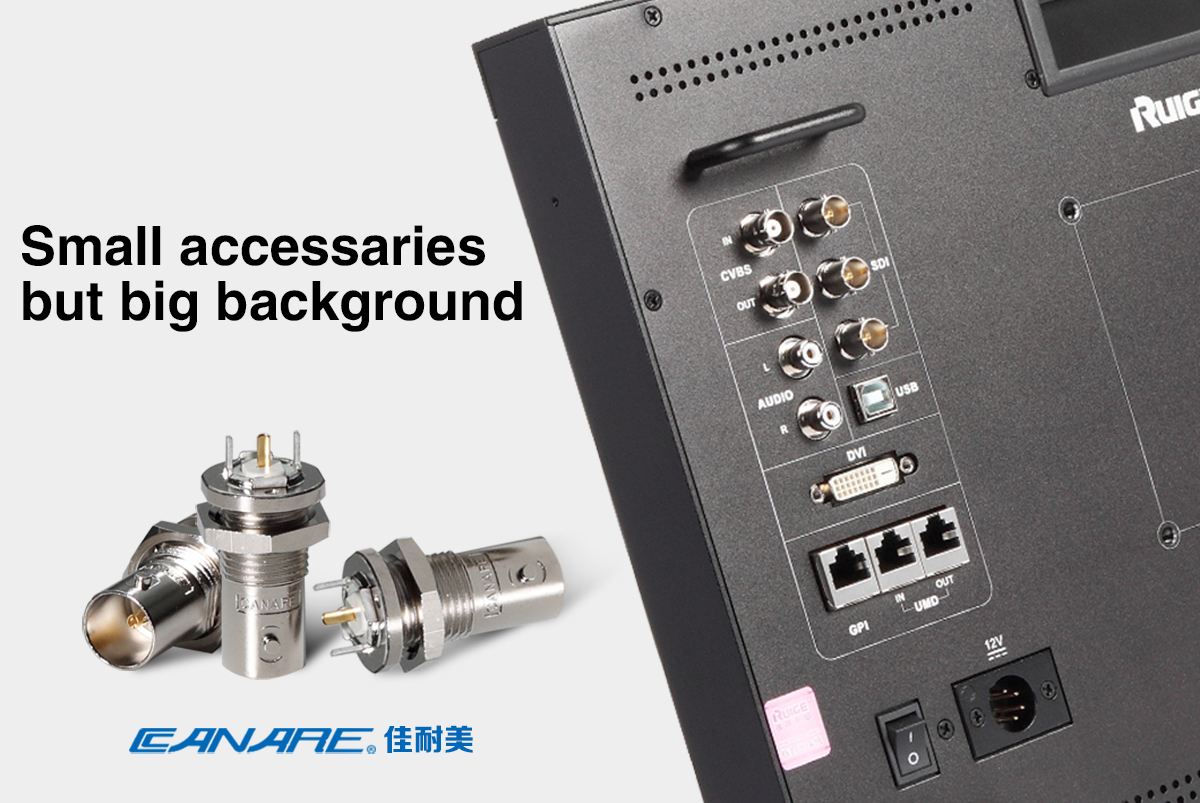 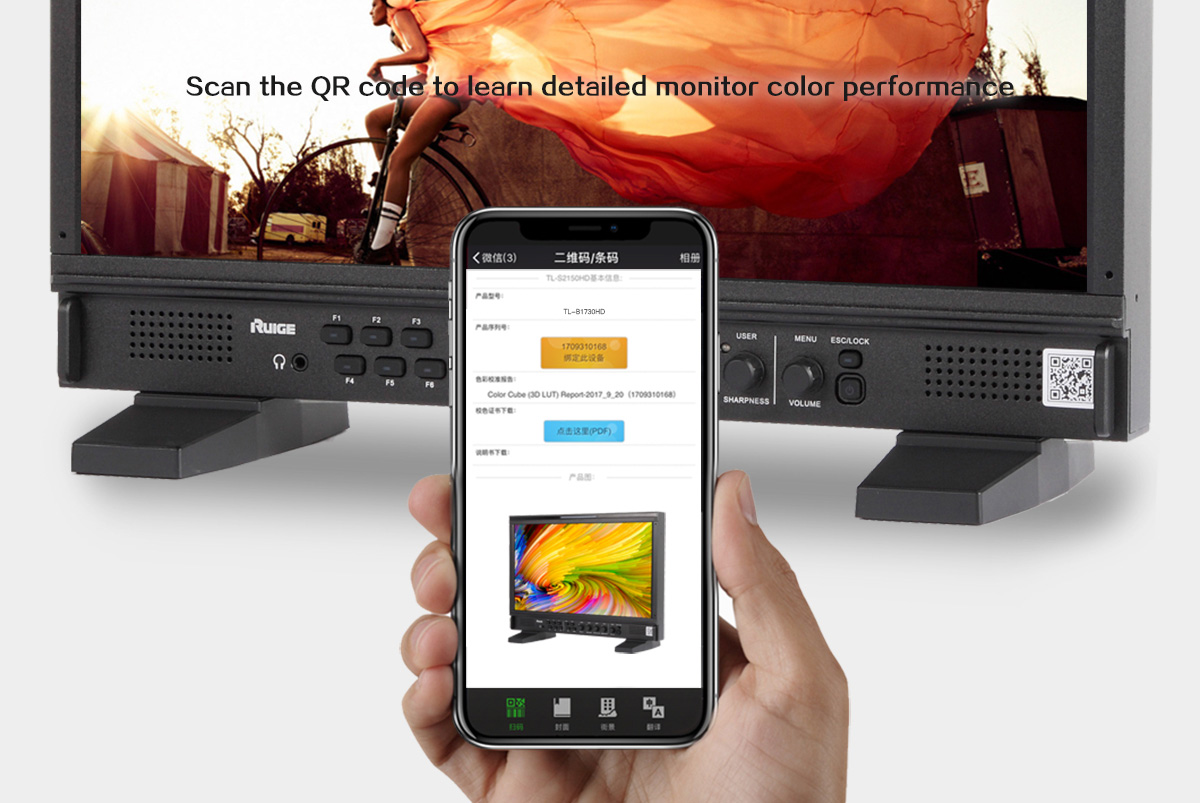 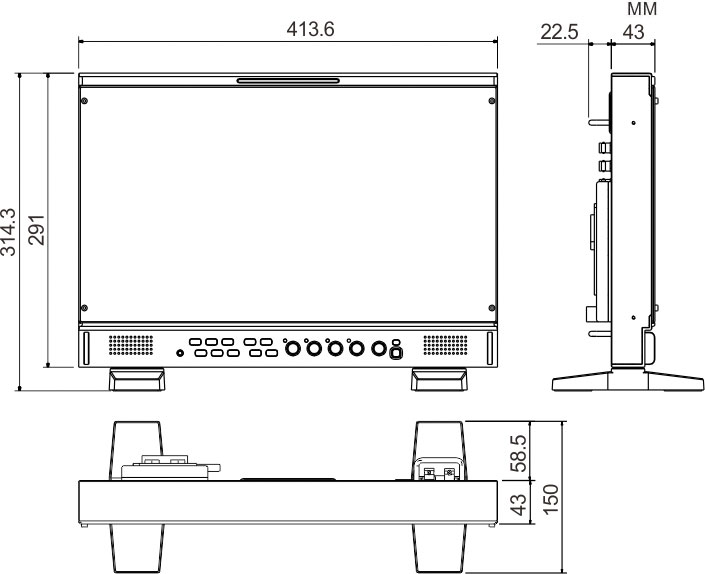 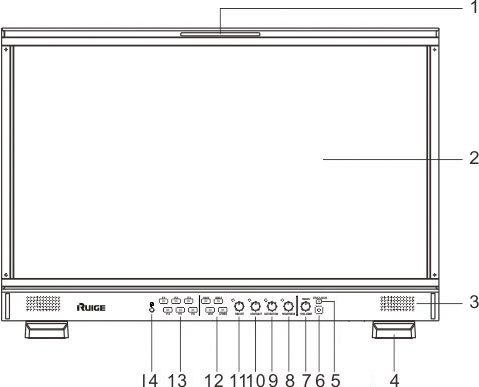 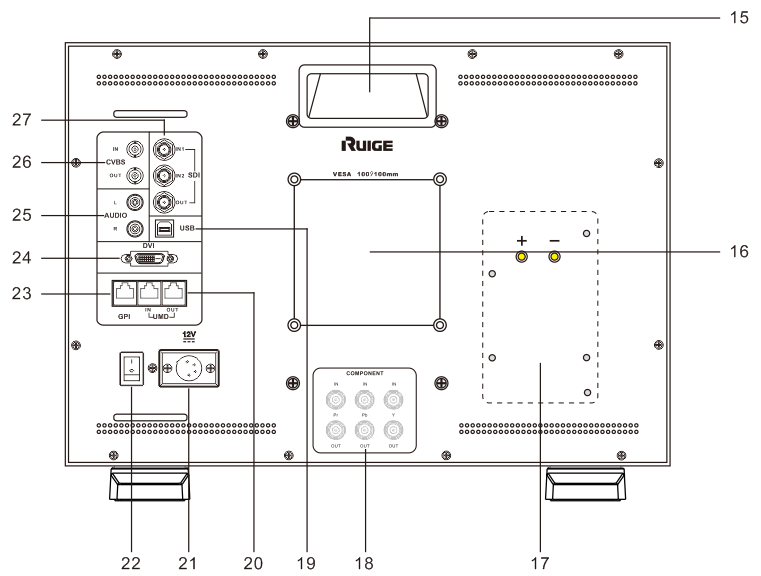 B/P/D Series Monitor internally built in 3D-LUT Color Management System in accordance with unified industry standards and it uses professional testing equipment to take systematic and accurate calibration for monitors to ensure the display indicator of monitor meet the tolerance range of color space standard .Therefore, it ensures each monitor has the accurate color restoration and the color of same style monitors is consistent to the maximum extent .

The luminance waveform can be superimposed over picture (see below). The Y-axis represents the luminance level. There are two indicators; one at 100% and one at 700mv.

The Luminance waveform is mainly used to read the value of the Y signal. This is helpful for setting Camera Iris levels.

RGB waveform can accurately reflect the overflow of the two ends. the RGB parade waveform shows how strong each color signal is in its own channel.

Any of the three channel overflow on the left or right of the parade, it results in the mixed RGB overflow. Then the details of light or dark part will lost. each one is pegged at 100% where it appears in its channel. The channel shows red at 100% where the red patch appears, but zero where the green and blue patches appear, etc.

There are 6 fixed vector measurement points; R, Mg, B, Cy, G and Ye. Neutral Colors (Black, White and Grey) are represented in the center of the vector scope. The direction is outward from the center and reflects the degree and amount of saturation; the further away from the center the higher the amount of color.

The vector scope shows the distribution of color within the video signal and can be used to determine the amount of color, correct color phase alignment and color analysis of objects within the picture.

16 channels of embedded audio in the SDI video signal can be decoded and 8 selective channels can be shown on the screen at the same time. The Volume unit shows both VU and PPM.

The Volume unit is used for measuring audio levels and calibration. This is helpful for making sure that audio levels are within technical requirements and specifications. 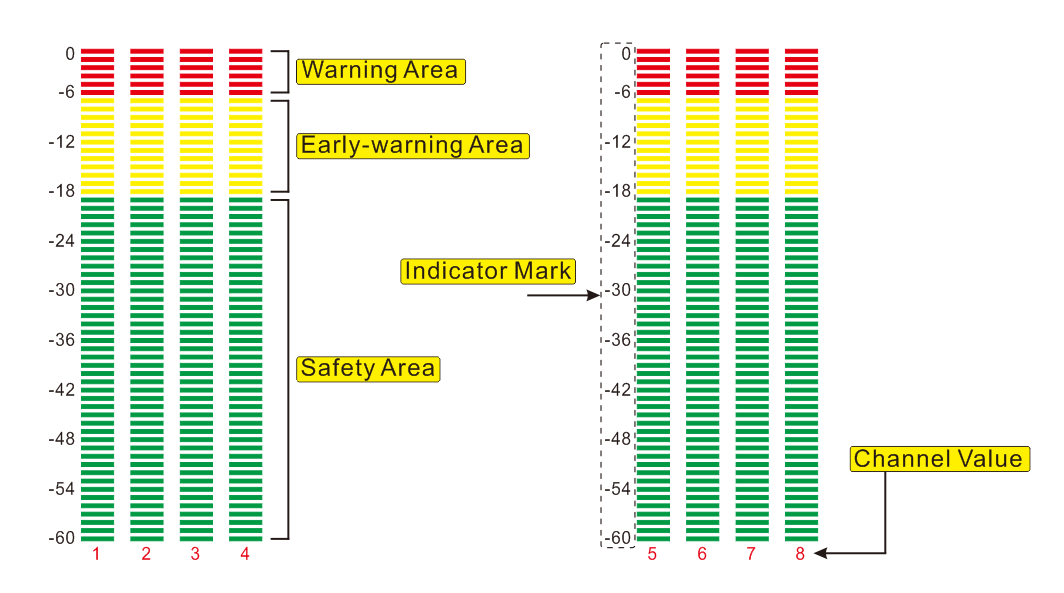 Timecode information (LTC, VITC, ) can be decoded on the screen.

Timecode generated by a camera or video recorder can be decoded and displayed on the screen as hour, minute, second and frames. Ruige P and B series monitors can display LTC and VITC information. Both can be displayed at the same time. 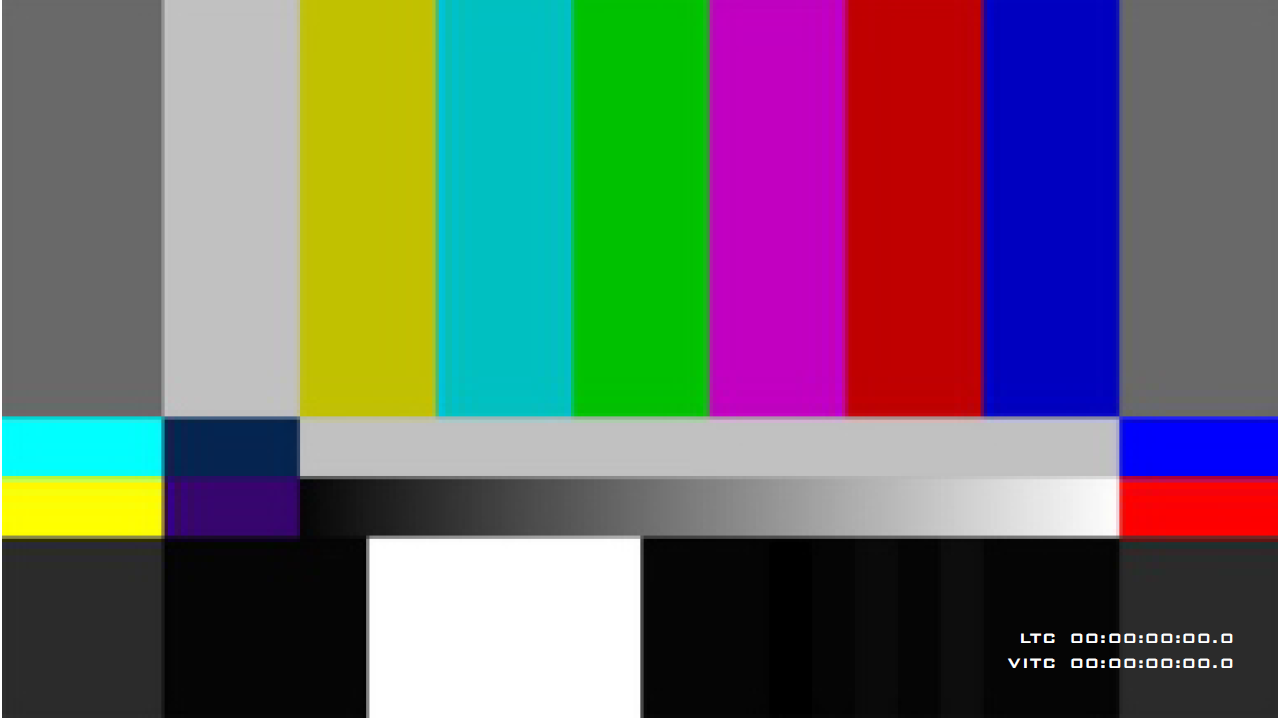 A red peaking filter is used for Focus Assistance. It is represented as a red line around sharp edges. The edge color can be changed if desired; available colors are red, blue, green, yellow and white.

Using a red peaking filter aids in the ability to quickly focus or refocus a shot. As the photographer zooms into focus his shot sharp edges will be represented as red lines.

Rapid positioning for out of range indicator

“Exposure analysis” function gives the user the ability to do fast out of range checks. When the image becomes more complex with out of range colors, it becomes too inconvenient to see.

The design inspiration of this function is based on x-ray machines and body scanners at airports. The black color indicates hard items and the softer items are represented with White and purple. These colors can be isolated in one second by contrasting with “Exposure Analysis” when switched on.

Case in point, security checks at airport are lacking due to subjective human factors. With Rapid positioning for out of range indicator allows for 100% accuracy. However, the end user has the freedom to not use this function for that artistic professional look. 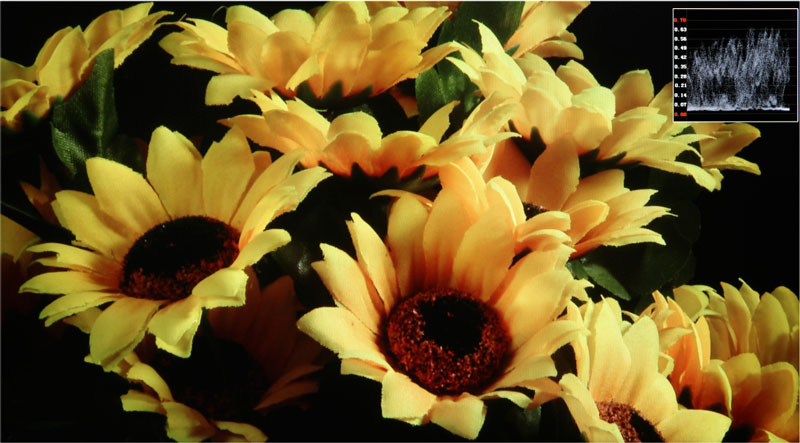 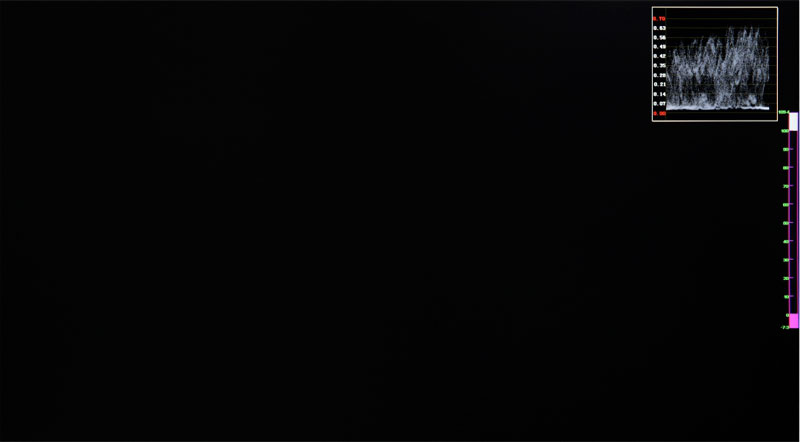 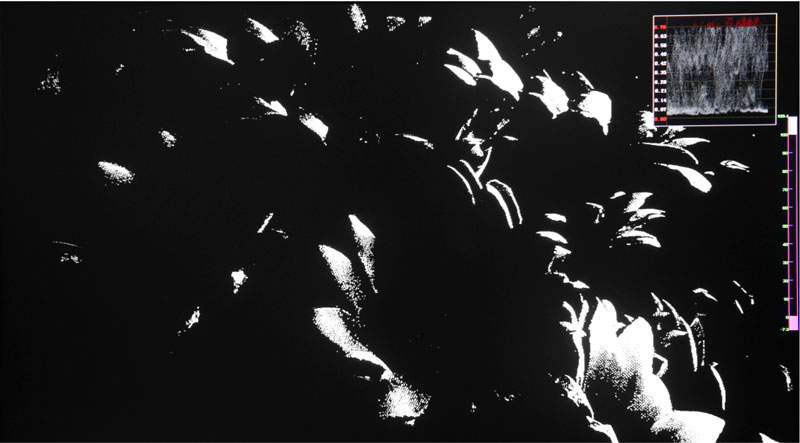 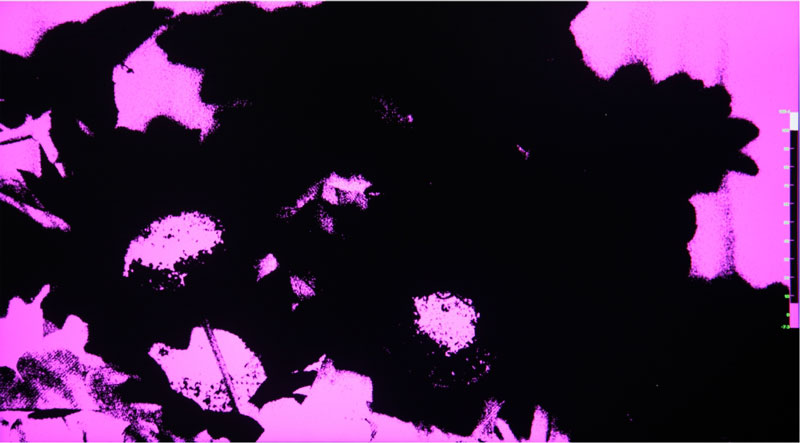 Luminance levels can be represented using False Color on the screen. It represents the amount of exposure explained as color values ranging from Blue to Green to Yellow to Red.

The zebra is suggested that the photographic exposure is a highlight indicator, and the aperture can be controlled according to the zebra tips when shooting with a manual aperture.

Usually when the brightness of the subject exceeds the maximum brightness (different types of models) that the camera can accommodate (different, this value is different), the zebra is started, so, when the aperture is adjusted, the subject should be the brighteree Slightly with zebras, while other parts have no zebra, which can be accurately exposed. If the spot is too much, the exposure is excessive; if there is no zebra pattern any part of the image, the image will be insufficient. Now some cameras are adjustable, usually adjusted between 60% and 100% of the highest brightness, and can be selected according to their own habits. 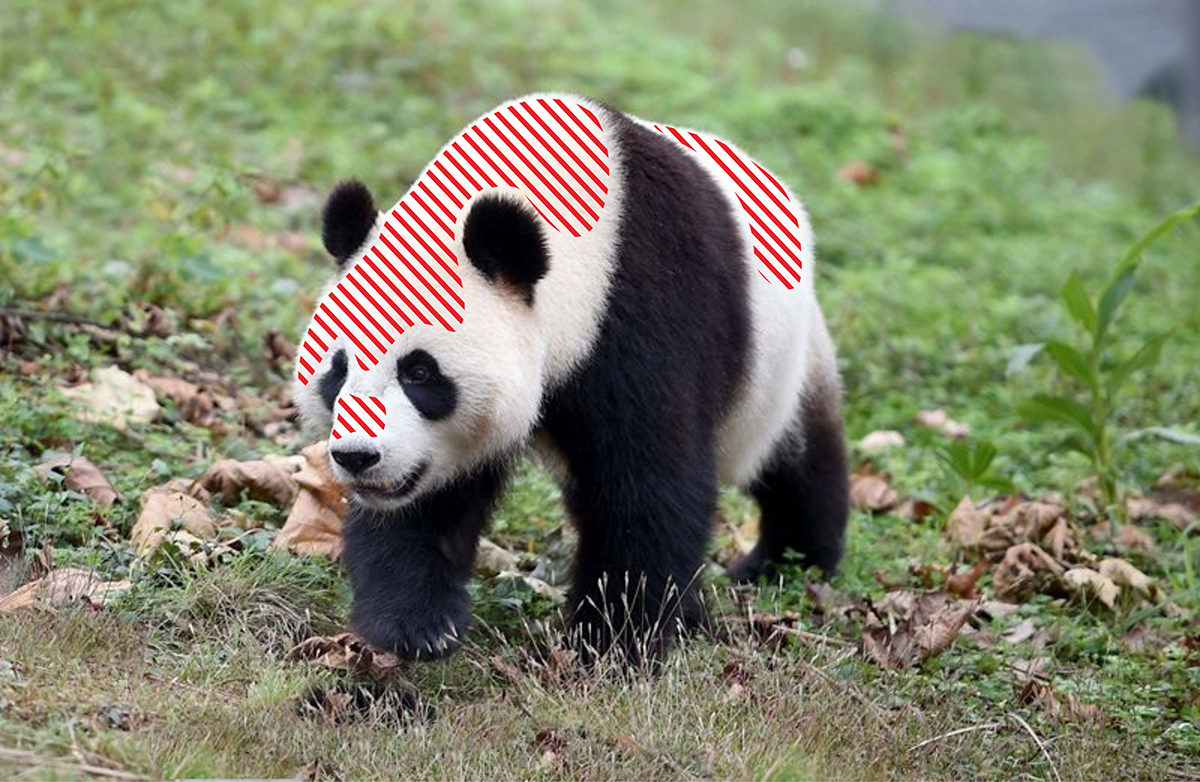 Image overflow or cutoffs can be checked using this feature. This is helpful during “Pan and Scan” as image is prepped for various broadcast markets. Ruige monitors have selections for Safety Marker Scales, Title Scales, Transform Scales and Center Cross. This is helpful for composition during shooting or title placement.

Only the blue portion of the video signal is displayed.

This is used for monitor color phase adjustment, level and calibration.

Mono(chrome) displays only the Y portion of the video signal

Human Eyes are more sensitive to the luminance signal therefore many viewfinders and small monitors have this function.

In order to adjust for correct scanning users can choose different Aspect ratios. Selections are: 16:9, 4:3, Letterbox, Pixel-to-Pixel, Over Scan and Built-in Scan.

This function can adjust the image shot by anamophic lens（e.g. 1.3X, 2.0X) to normal display ratio, and you don’t need to choose this function in the menu of cameras. The key is, not all ARRI camcorder possesses the function to correct the suqeezed images. 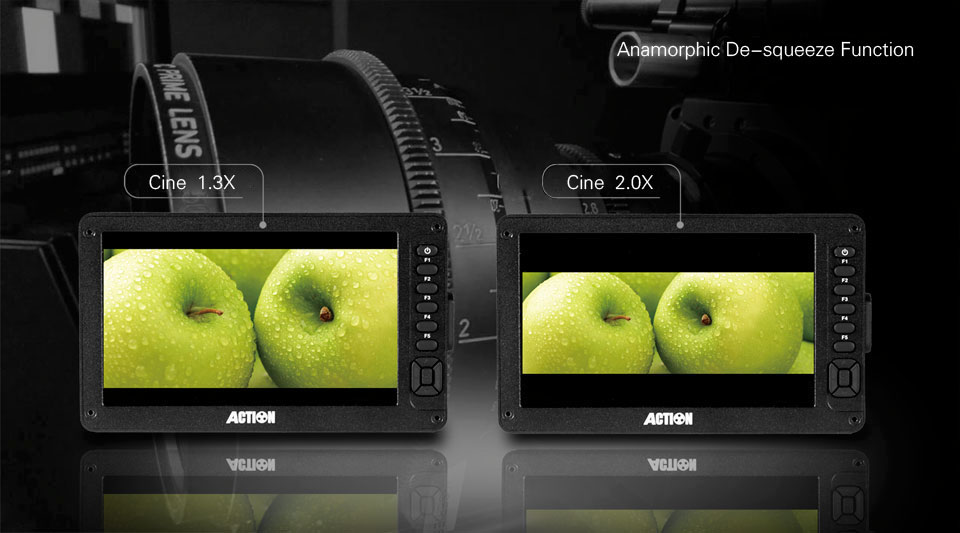 Overscan is often used to programing for TV broadcast.

Because of the limit of monitor size and effective pixels, not all of monitors can be shown Full HD signal. Ruige P&B Series monitors use RPD technology to make image parts by parts to pixel to pixel so that 1080 original pixels can be reappear.

This function can be used for the monitor with the resolution less than 1080. To view details, this function can avoid the loss of image detail due to lack of screen performance.

Dynamic Source information embedded in the SDI video signal can be displayed as UMD or IMD. This feature can be turned on and off via the menu.

It can be used to supply signal source information from video routing equipment to operators during a live broadcast event. 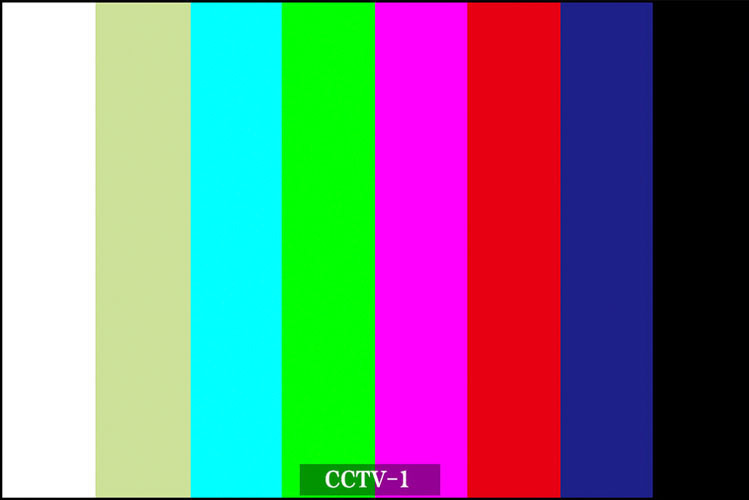 When use battery to supply power to monitors, please enter the menu to “Auxiliary Function”. And open “Battery Checker”,

So you will find one Battery meter displayed at the top-right corner, caculating the remaining of battery capacity. When capacity is less than 205，the scale meter color will be changed from Green to Red.

Test and preset the brightness, contrast, saturation, color temperature and other parameters of the monitor according to the shooting requirements, confirm and keep the status to ensure the consistency of the gray scale and color reproduction of the images in the entire shooting process. If the function keys on the panel can not be locked, it is likely to operate by mistake, result in poor shooting effect.
Ruige P and B series products are both equipped with security lock function. When the system adjustment is done, just press the LOCK UP button for 3 seconds, the device will automatically enter the locked state. To remove the lock function, press the button for 3 seconds. When the power is cut off, it remains locked, and will not automatically release.